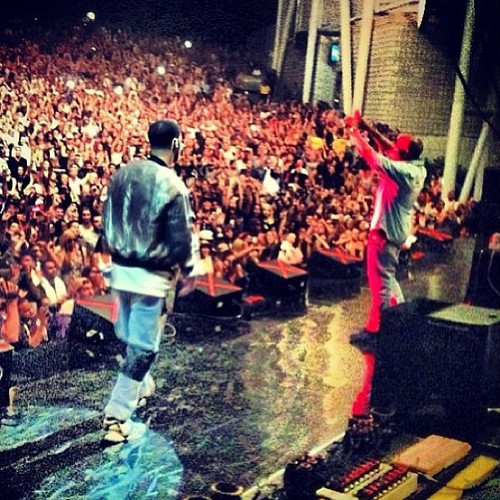 Last night, Drake pulled all the stops when he brought out numerous surprise guests to his 4th Annual OVOFest in his hometown of Toronto, Canada.  Drake brought out numerous surprise guests and performers, as is customary with the OVOFests in the past.  This year he brought out Lil Wayne, Big Sean, J. Cole & Miguel, The Weeknd, & French Montana.  Drake also hosted a few reunions at the festival as well, shocking the packed Molson Amplitheater with performances from the female Hip-Hop/R&B troupe, TLC, as well as a very rare reunion performance of Diddy & Ma$e.

But the most shocking….most epic….most goosebump infused moment of the night (hell, possibly of the year) was when the OVO General brought out none other than Yeezus himself.  Although I was not in attendance at the concert, when I finally watched the clip below of Drake bringing Kanye West out as a surprise guest, I seriously got chills.

I would argue that this moment is next to the Jay Z/Nas moment back in ’05.  Time and again people have wondered whether or not Drake and Ye have been at odds with one another.  Let’s face facts: love him or hate him, Drake is coming for the top spot in Hip-Hop.  Kanye and Jay have both ruled the rap world for years, and let’s also be honest about the fact that either one or both are your favorite rappers’ favorite rapper.  So it comes to no shock, that in spite of the fact that Drake is competing with Ye, he still has the utmost respect for the Louis Vuitton Don and even goes on to state that Kanye is one of the reasons he became a rapper.

Now can I be honest for a moment?  If it wasn’t for Kanye West I would probably not have thought that me becoming a rapper could be a reality.  You must remember, before Ye came onto the scene every rapper repped the ‘hood (emphasis on ‘REPPED’ because not all of these so-called thugs actually come from meager beginnings).  Jerseys, baggy and saggy jeans and super gaudy chains were the uniform for the popular rap acts of that era.  Then in walks this ‘arrogant,’ ‘producer-turned-rapper’ from middle-class America wearing a popped collar polo, and a fuckin’ backpack.  The College Dropout proved to be a classic, just like Ye predicted, but it was also revolutionary.  For the first time, one of the most popular rap acts in the music world, didn’t talk about killing people.  No fables of how hard it was peddlin’ drugs to make ends meet.  Instead there were stories of that shitty job he worked at folding display clothes at The Gap.  And who could forget the now legendary tale of how Ye got signed on the album’s closer, “Last Call.”

Ye opened the door for that black kid from the suburbs that not only wanted to rap, but also could hang wit the best of them.  Then comes Aubrey Drake Graham.  This half-Black/half-Jewish kid from Toronto who got his start playing the wheelchair bound heartthrob, Jimmy in Nickelodeon’s tween show, Degrassi.  About a decade ago, the previous sentence would definitely not have been describing who some are starting to call one of hip-hop’s new emerging “Rap Gods.”  But…much to the chagrin of many stubborn-ass old head hip-hop fans, it’s true.  So fuckin’ deal with it!  Drake got his start on the mixtape scene, using his funds from his acting career to pay for studio time, as well as video shoots to propel his music career.  Drake, like Mr. West, didn’t come from the hood or try to front like that was the case.  In fact, after watching a long-lost MTV Cribs’ish clip of the then teenage actor from T-Dot giving a tour of the suburban home that he shared with his mother and grandmother, it’s quite clear that Drake definitely didn’t start from the “FINANCIAL” bottom.  But Drake also opened doors, this time for those privileged Black kids from the suburbs whose parents basically supplied them with more than enough growing up.  Drake’s debut album Thank Me Later, and his 2011 follow-up, Take Care, were chuck full of tasteful rap party anthems, as well as tales of (sometimes self-imposed) solitude.  Both albums made Drake a superstar.

So why the hell did I take the time out to write up this blog post?  I’m glad you asked.  This fall there’s another Black suburban kid who’s going to try his shot for respect in rap.  He just so also happens to be the author of this blog entry.  My life’s story is somewhat like Kanye’s, but very much like Drake’s.  I too came from an upper-middle class upbringing.  Both of my parents were in my household.  Not only was I a member of the Greater Cleveland Chapter of Jack & Jill, but I was also a Beau in the Cotillion and was elected teen president my senior year of high school.  “So what?!” some of you may say, “what you gettin’ at Archie?”  What I plan on doing is finally telling that story to the world.  I plan on representing that same demographic of rap fan, but explicitly.  An advocate of education (with 2 degrees now, I might add), I talk about my years at Morehouse and NYU on record.  I also talk about what it was like driving my pop’s BMW to prom.  Not to gloat, but to simply tell OUR story.  The story of the ‘Token Black Kid’ in the predominantly white school you may have attended growing up.  The story of the black kid whose parents also took him on vacations almost every summer growing up (and, NO, I don’t mean roadtrips to visit family down south).  It’s a story that I’m proud of, and I know that others like me are proud of.  And after this great moment in hip-hop last night, I’m quite positive that the world is finally ready to embrace the new rap elite as well.